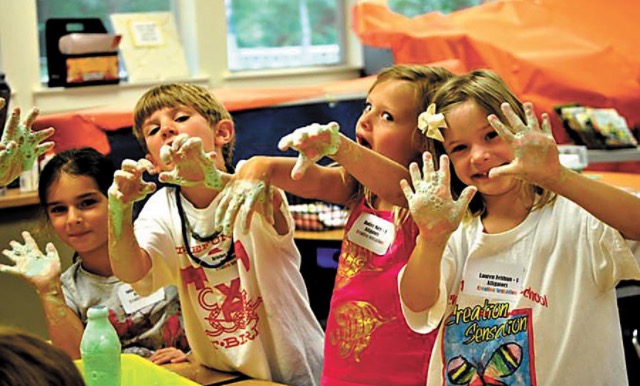 Posted on August 4, 2015 by Leonard Galmon and Liana Ambrose Murray

The Contemporary Art Center’s Summer Arts Camp is a place where children come to learn and experiment and try new things in the realm of visual art, culinary, dance, theatre, film, and music. This summer’s theme is “Imagining a World.” On the third floor is the visual arts classroom. The door is giant and white, like a heavenly gate propped open just for us, just for the children, and just for art. The walls to the art classroom echo the hums of running legs and skipping feet. Eventually, after a rowdy entrance, the kids are all working away at their pieces and the teachers and counselors are walking around offering help and checking progress. The room is big and bright, like the windows were set to shine light on the children’s twiddling fingers and scissor cutting hands. This is always a magical time: The room is filled with the children’s wonderful voices, in a space where we dream big and where they will create magnificent things.

Occasionally you come across an unhappy camper who isn’t pleased with what they’re making. One of the best feelings as a teacher is when you help them realize that what they’re doing is amazing, either by showing them how to correct a mistake or by helping them discover that what they were trying to do actually looks great as something else entirely. The camp is a place where confidence in their creativity is nurtured and allowed to grow. It’s been an amazing experience seeing the kids and thinking about how great such exposure to the arts is early on in life.

We are both artists and we are beginning to see how we’ve grown into having the mindset that we can do this, that we can be artists. From watching these kids we have realized the importance of encouragement and safe creative spaces for nurturing children to become critical, creative adults who are able to define themselves creatively, or even as artists without fear.

Unfortunately, this wonderful camp and all it has to offer is only available to those who can afford to pay. In New Orleans, poor most often means black, which is why a vast majority of the campers are white**. The problem is not the CAC or the camp, but instead, that it’s just another example of opportunities lost to black families all across the country.

Some may want to remove race from this issue and make it a problem of income disparity but these are one in the same. The development of this country’s economy is inextricably tied to race. Tracing this country’s major economic boosts gained from slave labor to the abolition of slavery where blacks were forced to be sharecroppers to their previous masters, or work the most menial, undesirable jobs, jobs that were necessary for the growth of the economy but no white person wanted to do. This country was built on the exploitation and oppression of black folk. After the Great Depression, FDR’s New Deal (financial and housing opportunities only offered to whites) and redlining reinforced black ghettos and built white suburbs. These practices, among many espoused from slavery, have built the structures of our towns and cities to keep black people in poor, practically inescapable warzones of neighborhoods. Wonderful programs that are designed to give kids exposure to art, such as the CAC’s Summer Arts Camp, are not accessible to those who live in these areas.

The theme of the CAC’s camp is “Imagining a World.” One of the ways that we can imagine a world is by reimagining the state of our world.  Through art, education, institutional changes, and efforts to ensure that we break these cycles of poor education and systems of poverty that entrap many black people, we can imagine and create a truly loving and just world that has never existed. Ultimately, as we break these negative cycles, we must also build cycles of love, respect, and recognition for the knowledge and culture that black people create and have created in this country. Children are our future and they need art to truly learn, to be creative, and to grow up into adults with the tools to think critically about race and the world. The CAC’s Summer Arts Camp is an amazing program and we want it to be the status quo for all children’s education, regardless of race or economic standing.