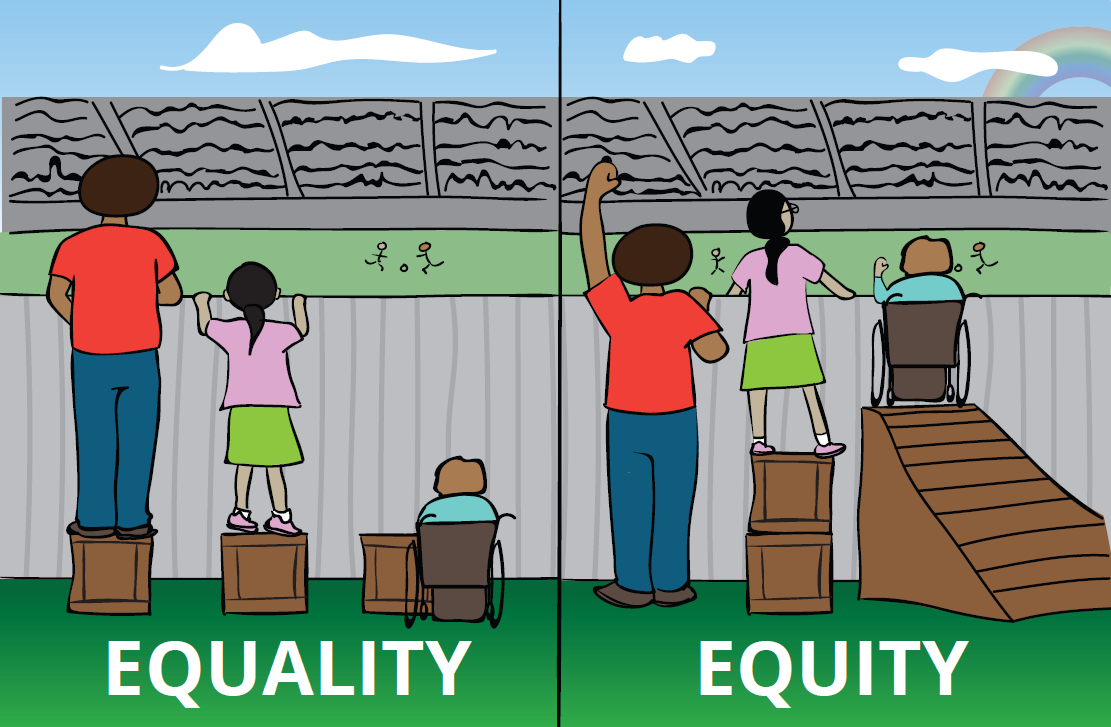 Posted on November 2, 2016 by Lamont Douglas

The Elusive Pursuit of Equity

But things have changed. The mission of educating our children has sprouted seeds that require a vast amount of our time, attention and energy. We have to begin to understand the concepts of equality and equity. And they aren’t the same thing. Access, fairness and a level playing field seem like simple missions but like so many issues, instead of compromise in the name of fairness, people have chosen to dig in their heels and move to their opposing corners to fight over money.

In my hometown of New Orleans, the dispersal of MFP funding in our schools has recently caused a bit of a firestorm. Some schools accustomed to receiving a higher portion of funds have seen their funding decrease in what many see as a much fairer distribution of funds. The funds in question previously went to higher performing schools that were neither inclusive nor open enrollment. The recalculated scale places a much greater emphasis on special needs students than it does, for example, on gifted programs or even poor students.

Two of the schools who saw their funding decrease have filed suit against the Orleans Parish School Board.

As I engage with other parents and parent leaders in my city we are still deciphering the idea of equity and equality in education. Patrick Anderson, a veteran teacher, parent, and immediate past president of the 100 Black Men of Metropolitan New Orleans says:

I do believe that parents probably don’t understand it (equity), so awareness is very important and critical.

It’s clear that awareness around the concept of equity is lacking; but if we change that, it just may be the thread that joins educators and parents in working towards more equitable schools. The notion of equity is something that I believe our community would welcome. But in order to get true buy in, we need to trust the people charged with actually implementing the equitable strategies we come up with together.

“I think I have a rather broad point of view on equity in education, which is just making sure that every child gets the same(education) opportunity. As far as understanding how and/or who makes that possible, I don’t have a clue. I just know that meetings and discussions are being done everyday but nothing gets done. Just talk. -Kim Dejan, New Orleans Parent Leader”

“When they talk about equity in education I think that’s a misnomer in my opinion. You have to really be involved or well versed on the policies and I really think they don’t want us to be. Because they don’t make it easy. I feel it’s another one of those buzzwords that they throw out as a distraction to make us feel as though they are giving us something but in actuality they are not giving us a thing.”

Equity cannot be a clever ‘show and tell’ presentation reserved for those moments when parents are actually around. Instead, its pursuit must be a joint endeavor in which parents play a primary role. We would welcome the opportunity to be part of fighting for something that will impact us directly.

← Teachers Wanted!
I choose choice and it’s not up for discussion →